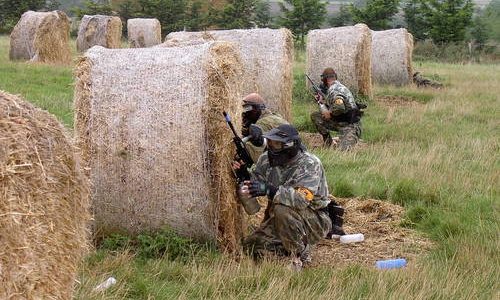 At the end of a thrilling paintball match, only one team will be left standing. Their victory will have depended on a variety of factors including the terrain, mission objectives and equipment. However, the most crucial element for increasing the chances of winning is the tactics that are employed. Knowing what to do in the heat of battle is essential.

Work as a Team

At its heart, paintball is a team sport. There have been numerous articles on sites including BBC News about how it helps groups of people bond. Whilst some may be tempted to go solo Rambo style, the easiest route to success is working together as one unit.

Be Aware of Gas and Pellet Levels

Despite the fact that paintball was invented in 1981, the equipment used has not changed very much. Gas-powered, pellet-firing guns are still the norm. Participants will have to keep an eye on their ammunition and gas so that it does not run out prematurely.

Sometimes the main objective is to advance forward. The best way to gain ground is providing cover for each other. While the enemy are being pinned down, it gives teammates the opportunity to change their positions.

If a paintball player has smoke grenades on hand, then they should use them. They will obscure teammates from enemies and create a useful distraction. It is sometimes also a good idea to throw grenades at the enemy during an attack.

All good paintball players need to know how to identify and utilise areas that can be used as cover. The best places should give them a good vantage point while concealing the player from the opposing team. Peeking out of cover is a risky move that leaves people vulnerable.